Navicula Support Stand UP in Bali 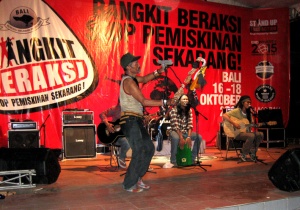 Greenville in stand UP Bali 09

A Guinness World Record shattered this weekend when 173,045,325 citizens gathered at over 3,000 events in more than 120 countries, demanding that their governments eradicate extreme poverty and achieve the Millennium Development Goals (MDGs). “Stand Up, Take Action, End Poverty Now!”, now in its fourth year, has been certified by Guinness World Records as the largest mobilization of human beings in recorded history, an increase of about 57 million people over last year.

“The more than 173 million people who mobilized this weekend sent a clear message to world leaders that there is massive, universal, global demand for eradicating poverty and achieving the Millennium Development Goals,” said Salil Shetty, Director of the United Nations Millennium Campaign. “In particular, we have seen citizens determined to show their governments that they will hold them accountable for keeping their promises to end hunger, improve maternal health and abolish trade-distorting agricultural subsidies. They will not accept excuses for breaking promises to the world’s poorest and most vulnerable people, who have already been hardest hit by the global food, economic and climate crises they had no role in causing.”

“Stand Up is proven to be a growing global mobilization, as well as an ongoing grass roots movement from remote areas and cities in so many countries, both rich and poor,” said Sylvia Borren, Co-chair of the Global Call to Action Against Poverty (GCAP), who attended several “Stand Up” events across The Netherlands last weekend. “These are the voices of young people, women and men demanding the eradication of poverty, and new answers to the food, economic and climate crises. We will carry this overwhelming message forward in the weeks and months ahead to influence both the Copenhagen climate discussions and next year’s MDG review.”

Currently 1 billion people around the world are hungry and 500,000 women continue to die annually as the result of pregnancy and childbirth. The vast majority of these deaths are preventable.

The mobilization was organized globally by the United Nations Millennium Campaign, in partnership with a range of organizations including the Global Call to Action Against Poverty (GCAP).

The 3,000 events across every inhabited continent this weekend included:

In Bangladesh, civil society campaigners raised the call “National Unity Can Eradicate Poverty,” urging that a “Poverty and Hunger Free Bangladesh is Possible Now.” The Prime Minister led the nation in pledging to remain united to develop the country by 2020. At a rally in Dhaka, she called upon all political parties to jointly fight corruption and stabilize democracy.

Despite the typhoons that hit the Philippines just before “Stand Up,” 35.5 million people in the country Stood Up and the “I Vote for MDGs” campaign, a survey on the issues voters believe should be prioritized by the 2010 Presidential candidates, was launched.

In Nepal the President read a Stand Up Pledge with members of the Constituent assembly at an event broadcast live on national television, followed by a concert in a large open-air theatre in the heart of Kathmandu.

In the United States, the Irish band U2 brought 50,000 concertgoers to their feet for a “Stand Up” moment during their October 18 concert in Norman, Oklahoma.

From Cape Town to Cairo and from Accra to Kampala, millions of Africans stood up in churches, mosques, schools, markets, streets and work places to call on their leaders to end poverty and inequality. In Uganda, the Local Government Association joined “Stand Up” by launching a historic award to honor the best-performing local government. The inaugural award was presented to the Kasese District.

In South Africa, housemates on the hit television show “Big Brother” made passionate appeals to world leaders to end poverty and led the continent in reading the “Stand Up” pledge, collected food for disadvantaged children and wrote a song on poverty. They called on African leaders to stop maternal death, end hunger and address climate change.

In Nigeria, legendary African artist Femi Kuti led over 60,000 people attending the annual event commemorating the life of his late father Fela Kuti, in pledging their commitment to campaigning fervently against poverty and injustice. Femi urged participants at the festival to be bold when holding their governments accountable, noting that Africa has enough resources to end poverty. Accusing African leaders of mismanaging public resources through corruption and poor governance, he called on them to focus more attention on programs leading to the achievement of the Millennium Development Goals.

At Federation Square, Melbourne, a concert organized by Make Poverty History Australia and AusAID included a flash mob stunt and performances by entertainers including Diafrix, a musical group of African refugees.

Citizens of Papua New Guinea Stood Up for the first time this year, in churches and government buildings, with support from the government Department of Community Development.

In Halifax, Canada, citizens marched against poverty in a rally organized by Make Poverty History.

In Italy, more than 400,000 people participated in 200 sports events across the country. The people of L’Aquila, which was hit by a devastating earthquake in April, ran a marathon to show their support.

In Paris, the streets were invaded by 4,000 roller-bladers on Sunday proudly sporting ‘Stand Up, Take Action, End Poverty Now!’ t-shirts.

In Spain, coordinated marches nationwide included a rally in Madrid on October 16 which was followed by an outdoor concert featuring Spanish rock bands.

Peru was one of several countries which used “Stand Up” to start a process of climate justice hearings aimed at gathering the testimonies of people whose lives and livelihoods are being destroyed by global warming.

Hundreds of people gathered on October 16 at the International Labor Organisation (ILO) headquarters in Geneva to Stand Up Against Poverty in a joint action with UNDP and UN agencies, led by ILO Director-General Juan Somavia.

Global Call to Action Against Poverty

Denpasar, 18 October 2009 –From the early estimation of 500, this afternoon at 5:30 P.M. at Lapangan Puputan Badung, about more than 4000 people gathered, stood-up in the reading of the pledge to end poverty in Stand-up and Take Action – SUTA Campaign. Apart from the civil society of all classes, the Vice Major of Denpasar, the Regional Secretary of Bali Province dan representative of the Provincial Legislative Assembly, too, mingled and showed their enthusiasm in this activity. The 2000 white rubber bands supply used to count the number of people were not enough, even about the same amount of people did not wear any. Nevertheless, the spirit was still on fire and the people seemed to enjoy the night of music by Bali’s indie bands. Tonight, report on the number of people standing-up has been sent to later be counted all over the world, to find out whether this year, SUTA can break the Guinness World Record for the biggest mass mobilization, breaking its own record last year, that was 116 million. The poster exhibition which was earlier planned to be held on 16 October, has to be cancelled and moved to the front part of Bali Museum instead, together with the rest, including an additional event, MDGs discussion taking the theme of poverty with one of the speakers from the Provincial Legislative Assembly, Sumiati. Tents of MDGs services, subsidized food market, free healthcare services, cartoon exhibition, as well as street art – which seemed to interest the children the most, since they could express themselves freely – colored the driveway. This event, which was coordinated by Alase Bali working together with several organizations and the community elements in Bali, supported by the UNDP and the Government of Denpasar Municipality, has been successfully conducted. From here, it is expected that the world leaders can see and be reminded of their promises to achieve MDGs by 2015.